So um, I found the real problem. 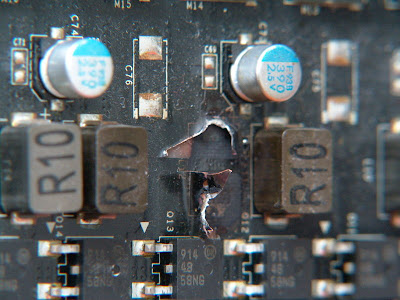 The power supply wasn't too small, apparently my earlier troubleshooting was partly flawed. Something went wrong with this component on the video card, and it was causing a short circuit. It completely fused itself, burnt part of the circuit board, and scorched some neighboring components.

I was very sad when I figured this out, cause that video card would be very expensive to replace. (I've already hosed my warranty by removing the heatsink, watercooling, and overclocking it.) Undaunted I grabbed my pliers, tore the offending component off the board, and plugged the card back in.

Apparently it was an appendix; the video card (so far) works fine. - Who knew!?

Although I really would like to know what kind of a component it is. Maybe I can order a new one and solder it on to the board. I'm assuming it's some kind of a power supply component for the video card that overheated and progressively shorted itself out over a period of time. If you want to help me identify it here are some more pictures.
Posted by Josiah Luscher at 5:30 PM No comments:

Happy because I found cheap replacement motherboard for my computer from a local craigs list type site. Unhappy because as it turns out my current motherboard is fine. After doing some trouble shooting this evening I found out that the powerswitch has done bad (It's a way nice {expensive} switch too!); and I found out that it seems the powersupplys that I've been buying aren't powerfull enough for my machine.

I started with a 750W PC Power and Cooling (My favorite brand of power supply). It worked well for a long time, until I upgraded the motherboard, CPU, and video card. Then the computer started to have strange problems. Sometimes it wouldn't start. The LED's would flash, the fans might spin just a touch, otherwise nothing. So I brilliantly stuck a screwdriver into the powersupply causing it to explode.

Then I picked up a 650w Antec (Another very good brand {in my top three definitly}). It managed, somehow, to run my computer for a time. Then I overclocked my CPU (2.5ghz => 3.2Ghz) and video card (~100mhz). Then it started to have problems again.

Assuming it was the powersupply I bought another one. A 500w OCZ with modular cords (I like their ram...) Notice that as I'm doing this it never occurs to me that I might need a bigger powersupply...

Having said that I have not yet tested the output of the video card. But, before this whole shenanigans started I suspected the video card, and my old one is now running well in a friends computer. So I'm reluctant to assign blame to that component.

The newegg powersupply calculator says I need over 700 watts, and thats before the water pump, and the overclocking. If I want to add a second video card at some point I will need at least a 1000W. Maybe more.

I have half a mind to build my own. I've got a pair of 900va transformers down stairs that put out 8v or 16v (depending on how they are wired). It would be a pretty wicked bragging point to have a non-switching 1800w powersupply. It would need it's own dedicated 20A circuit, and would weigh over 50 lbs.

I reserve the right to edit this in the morning, I'm tired. Good night!
Posted by Josiah Luscher at 1:15 AM No comments: